Scholz calls on G7: We must continue the pressure, Russia must pay a high price for ... 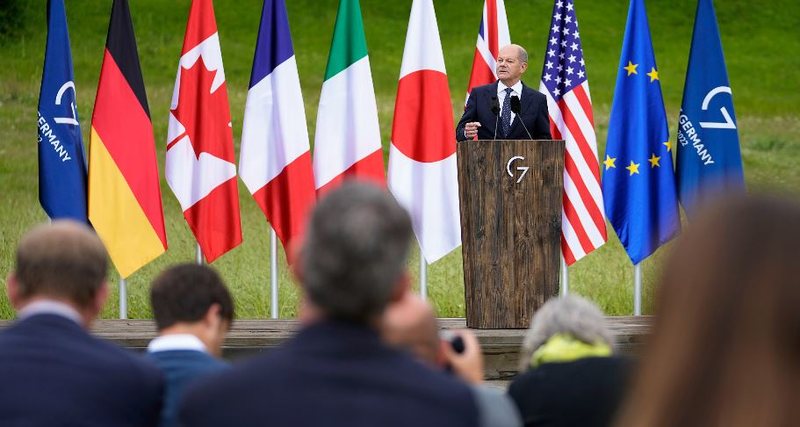 German Chancellor Olaf Scholz spoke at the closing press conference after the G7 summit in Germany, where he said that G7 leaders will continue to try to get Russia to pay a high political and economic price for its fight against Ukraine.

"The end of the war is never predictable and it is important that we continue to put pressure and support, so that Russia realizes that it cannot implement a dictatorial peace," Scholz said.

"Without a fair agreement with Ukraine, sanctions will continue to exist," Scholz added.

At the end of the G7 summit, the leaders said that sanctions against Russia would be maintained for as long as necessary. As G7 leaders reiterated their condemnation of Russia's "unjustifiable, unprovoked and illegal war against Ukraine," they called on China to put pressure on Russia to withdraw its troops from Ukraine.

Scholz said he expected China not to undermine sanctions against Russia. Cooperation with China was ambivalent, he said, adding that the country was "struggling with the consequences of its Covid strategy, which also has implications for world trade."

The G7 pledged to support Ukraine as long as necessary, financially, militarily and diplomatically and humanitarianly. Funding for Ukraine will reach over $ 2.8 billion in humanitarian aid in 2022, as well as $ 29.5 billion in budget aid, according to the statement.

The German chancellor, meanwhile, called for a Marshall Plan for post-war reconstruction in Ukraine.

The West is in tension/ NATO raises the alarm, the Russian submarine disappears under the Arctic, what is expected to happen