"Beware that journalists are recording", the cameras "capture" the moment when Macron gives the bad news to Biden 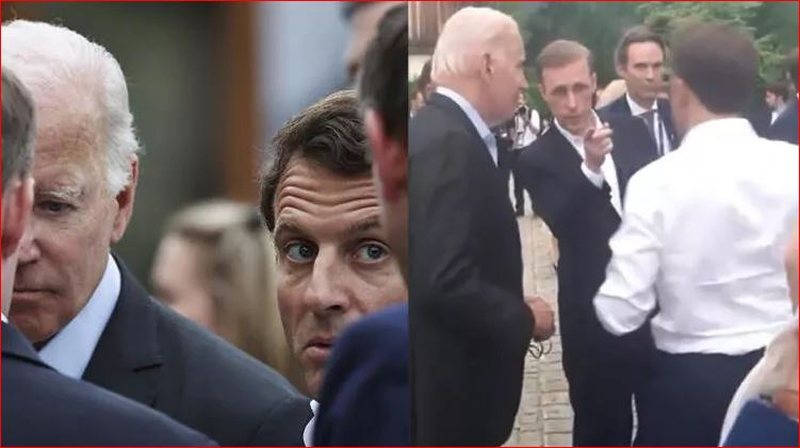 US President Joe Biden and French President Emmanuel Macron were talking about the oil crisis, but unfortunately their conversation was "caught on camera".

Although Biden's national security adviser, Jake Sulivan, warned the leaders to reporters, it was too late after Macron's words were heard.

Biden and Macron were talking about the oil crisis while they were just a few feet away from reporters.

When Biden's adviser saw the reporters filming at that moment, he immediately interrupted Macron and told him: Beware, the cameras are recording. Maybe you should keep going inside.

Even though the leaders interrupted their speech some of Macron's words were heard.

According to the New York Post, the French leader referred to a meeting he had with the leader of the United Arab Emirates, Sheikh Mohammed bin Zayed al-Nahyan.

"I spoke to him on the phone. He told me two things. The first is the maximum production capacity and the second the price. "The Saudis can raise the price a little more, but they do not have the capacity, at least for a period of six months no change is expected."

These were Macron's words that were also heard by journalists.

The US press commented on it as bad news

The news provided by Macron was interpreted as "bad news" in the American press.

During his visit to Saudi Arabia next month, President Biden was expected to meet with Arab officials and take steps to help mitigate the rise in oil prices associated with the invasion of Ukraine.

Rising oil prices in the US are contributing to the worst inflation since 1981, while lowering President Joe Biden's vote of confidence.

The leaders of the countries with the 7 most powerful economies in the world gathered at the castle Elmau in Bavaria.