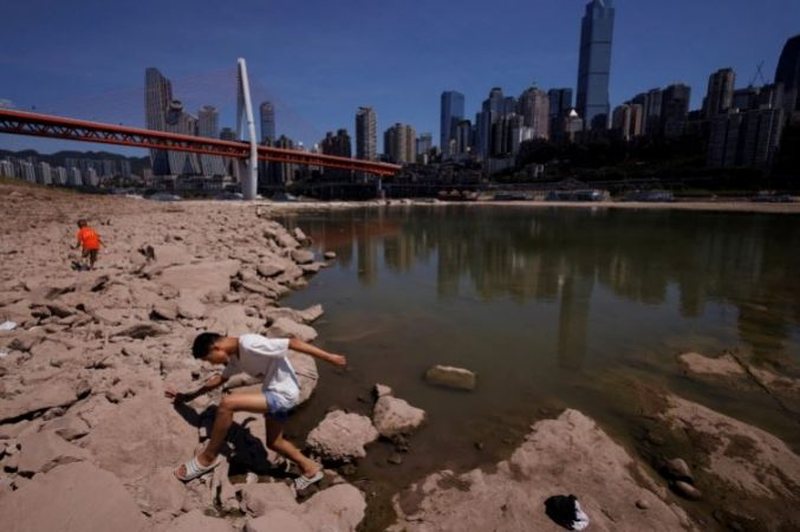 The national drought "yellow alert" comes as regions from Sichuan in the southwest to Shanghai in the Yangtze Delta have experienced weeks of extreme heat, with government officials repeatedly citing global climate change as the cause.

The yellow alert is two levels below the most serious warning on the Beijing scale.

In one of the Yangtze's important flood basins in central China's Jiangxi province, Poyang Lake has now shrunk to a quarter of its normal size for this time of year, state news agency Xinhua reported.

About 66 rivers in 34 counties in the southwestern region of Chongqing have dried up, state broadcaster CCTV said.

Rainfall in Chongqing this year has dropped 60 percent compared to the seasonal norm, and the soil in some districts is severely lacking in moisture, CCTV said, citing local government data.

China's Ministry of Water Resources has instructed drought-stricken agricultural regions to draw up rotations to determine who can access supplies at any given time to ensure they do not run out.

Factories in Sichuan and the adjacent metropolis of Chongqing have also been ordered to close as reservoirs supplying hydroelectric power dropped to half their normal levels and demand for air conditioning increased in scorching temperatures.

The impact of the drought in Sichuan is extremely severe because the province gets 80 percent of its energy from hydroelectric dams.

The most affected areas

Al Jazeera's Patrick Fok, reporting from Chongqing, said the area is one of the worst hit by the heat wave in China, with temperatures reaching an all-time record high of 45C (113F) earlier this week.

"It's hard to escape the effects of this heat wave and the drought that comes with it," Fok said. "Reports say more than 350,000 people in rural Chongqing are suffering due to lack of water supplies."

"She was 12 years old, I was 30"/ Joe Biden "stirs up" the network, strong reactions erupt after the President's statement (VIDEO)