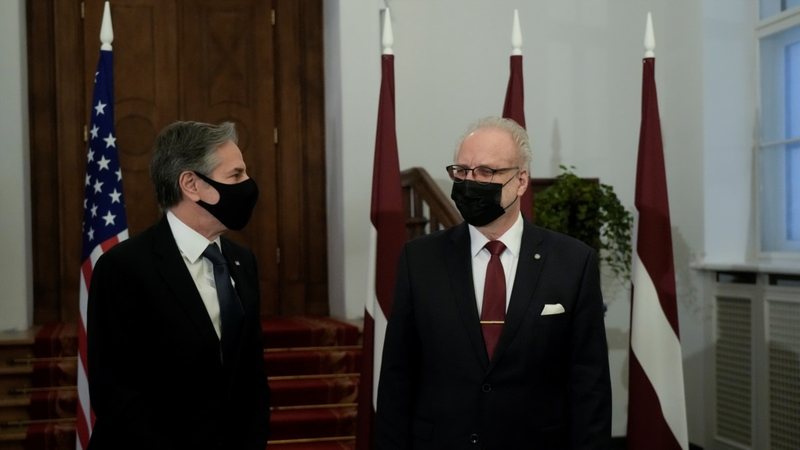 Secretary of State Antony Blinken today warned Russia not to take any "escalating step" against Ukraine, stressing that "a new aggression would have serious consequences."

Speaking to reporters about Latvian Foreign Minister Edgars Rinkevics during a visit to Riga, Secretary Blinken said the United States was "very concerned" about sending Russian troops along the border with Ukraine.

Concerns about the increase of Russian troops will be discussed at the two-day meeting of NATO foreign ministers, which takes place on Tuesday and Wednesday in Riga.

Ahead of the NATO summit, Alliance Secretary-General Jens Stoltenberg called on Russia to reduce tensions in the region, adding that the increase in military presence was "unprovoked and inexplicable".

"A possible Russian attack on Ukraine would have a high price and serious political and economic consequences for Russia," Stoltenberg said yesterday.

The NATO summit in Riga comes at a time when NATO members Latvia, Lithuania and Poland are facing a crisis on their borders with Belarus.

The European Union (EU) has accused Belarussian President Alexander Lukashenko of drawing thousands of immigrants from the Middle East to cross into Latvia, Lithuania and Poland in a bid to destabilize the European Union. Brussels says President Lukashenko is seeking revenge for EU sanctions on Belarus.

Another goal of the NATO summit will be to update what the group calls the Strategic Concept, last modified a decade ago.

Mr Stoltenberg said it was important to review the document because of the changing threats facing the alliance in a world he called "more dangerous".

"Russia's behavior, cyber attacks, terrorist threats, nuclear proliferation and security implications for China, which is becoming increasingly a global power, are some of them," Stoltenberg said.