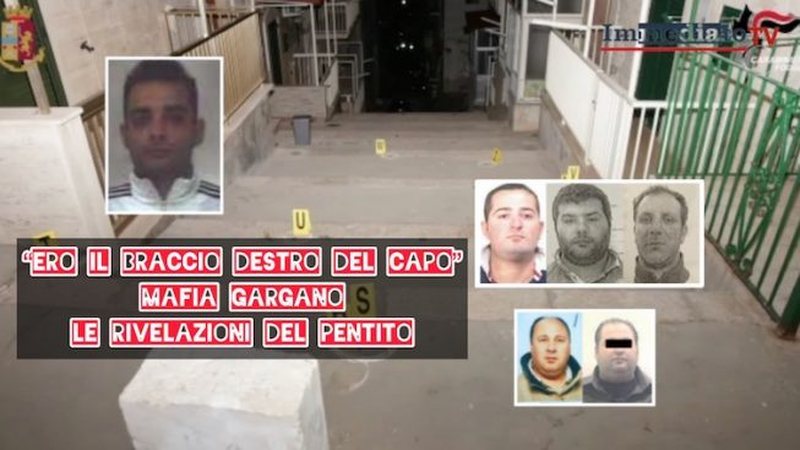 "I was the trusted man and the right hand of the boss," said Danilo Pietro Della Malva, who is already cooperating with the police.

It seems that some of the members of the mafia clans have started cooperating with the police.

Finally there are four collaborators of justice in the span of several years, almost all former members of the Raduano clan, among the most powerful in the city.

Danilo Pietro Della Malva known as "Meticcio", the former right-hand man of boss Marco "Pallone" Raduano, has confessed to the scheme of trafficking tons of drugs in Italy.

During this story he also spoke about the role of Albanians in drug trafficking.

Della Malva, who holds the status of penitent and protected witness, has shown to Italian investigators the structures of the underworld, especially that of the Gargano clan.

"I belonged to the Raduano clan led by Marco Raduano and Anthony Azzarone who operated in the territory of Vieste, Mattinata, Peschici and other territories of the Gargano area. The main activities of the clan ranged from theft, robbery, weapons, drugs, extortion, murder, and attempted murder. I got into the clan structure with an important role, I came after Raduano and Azzarone. "I was a trusted man and the right hand of the boss and then there were the other boys", Della Malva confessed.

He further told about other clans in the area and the way Albanians were supplied with drugs.

"There were other criminal groups operating, in particular the Iannoli-Perna group. Their leader was Girolamo Perna, who was later killed; The new leaders have become cousins ??Iannoli, Giovanni and Claudio. Indeed, during the period in which members of our group were detained, the Iannoli group had taken control of criminal activities. "To have access to a criminal organization, committing and executing a murder is an essential action because it is credible in the eyes of other members of the organization," the penitent confessed.

He further states that the narcotics came from Albania and that the delivery was done by the Albanians.

"The narcotics came from Albania and the delivery was done by the Albanians. This happened in the period between 2015/2018. The Iannoli-Perna group collaborated with the Monte Sant'Angelo group Li Bergolis on this drug trafficking.

According to Meticcio: In addition to the Albanian marijuana supply channels, the Iannoli-Perna group received cocaine, hashish and marijuana in San Severo from the Nardino brothers.