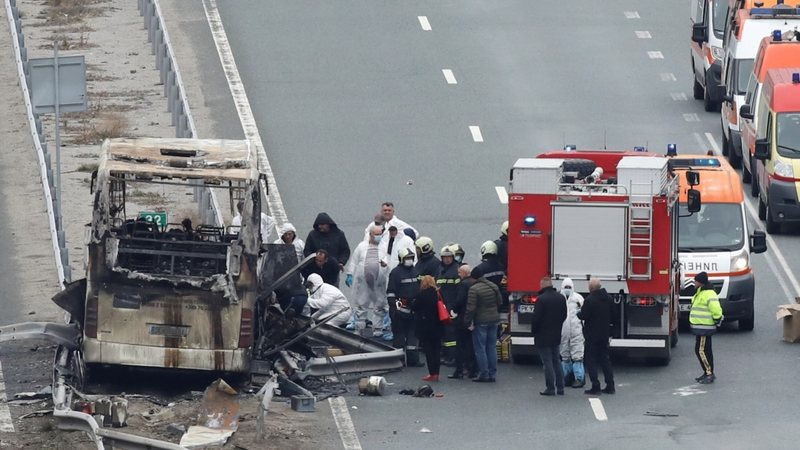 Bulgarian prosecutors investigating a bus crash that killed at least 44 people from northern Macedonia on Tuesday said on Thursday that according to preliminary findings, the fire was caused by a powerful bus hitting the fence. highway metal.

Bulgarian Chief Prosecutor Borislav Sarafov told reporters that the bus' friction with metal curbs and asphalt caused sparks and subsequent ignition of fuel and motor oil, as "air cushions became hot, causing the combustion to ignite and cause a fire." of unprecedented proportions ”.

Bulgarian prosecutors say 44 bodies were found on the bus, whose deaths were the result of smoke asphyxiation; that seven people have survived and are in hospital, while there are dilemmas about the fate of the eighth person, presumed to be a survivor, based on the testimony of one of the survivors.

Mr. Sarafov said there were a total of 52 passengers along with the drivers who had boarded the bus and that a search was under way for the eight survivors, while the first dilemma of prosecutors was that during a 20-minute break, one of the passengers changed the bus. . Four Besa-trans agency buses were traveling from Istanbul via Bulgaria to northern Macedonia.

The Bulgarian chief prosecutor denies the possibility of a terrorist act in the case. He also refuted speculation that there were other witnesses at the scene, in addition to the seven surviving passengers, four of whom were men and three women.

But Bulgarian prosecutors are still unsure how the bus fire spread so quickly and furiously, which is expected to be investigated by fire, traffic and vehicle experts. The prosecution denies the versions that the cause of the fire was from the oil canisters on the bus, because the three pipes that were found were not filled with oil, but only oil residues were found, while the pipes were not burned.

The prosecutor's office in Sofia said that there are signs that the accident was caused by human error, but that this will have to be confirmed by expertise. "But if the cause lies in the bad signalization on the highway, then there will be responsibility," said Mr. Sarafov.

Meanwhile, the explosion, which the survivors heard, was from the powerful impact of the bus on the metal fence of the highway, according to the Bulgarian prosecution.

The bus of the "Besa-trans" agency was not equipped with the proper license for international passenger transport and for this release on the border of Northern Macedonia with Bulgaria, two Macedonian customs officers have been suspended, while sanctions are expected against their superiors.

Bulgarian authorities have also announced a search for responsibility by the police and their customs.