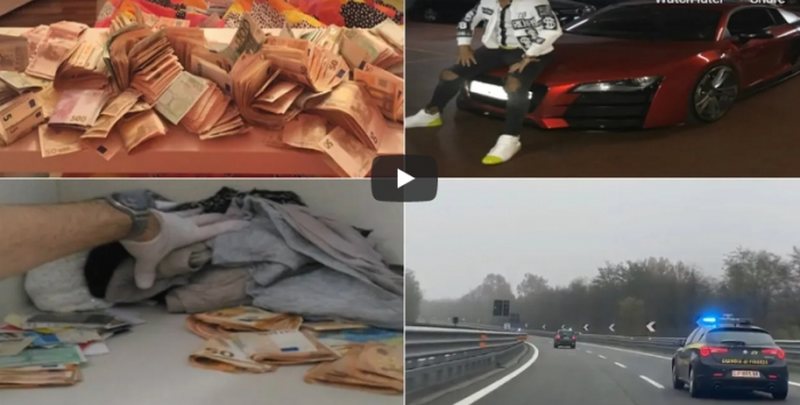 A fortune with staggering values ??amounting to 6 million euros that is allegedly obtained through money laundering originating from crimes, through the purchase and management of a chain of commercial and economic activities.

In particular, 8 bars, 1 gaming hall in the city of Turin, 3 luxury cars (respectively an Audi R8, a Porsche Macan and a Range Rover Evoque, all recently purchased), companies and cash were seized.

Investigations, coordinated by Assistant Prosecutor Dr. Cesare Parodi, of the local Public Prosecutor's Office, was carried out by the Economic-Financial Police Unit of Turin, after analyzing some reports of suspicious transactions carried out by financial intermediaries, which showed significant movements of money made by entities apparently without income, but with a high standard of living.

Investigative investigations showed that these entities had manifested a sudden and unjustifiable entrepreneurial development, buying shopping malls scattered throughout the city of Turin, until the creation of a real "chain" with their brand name.

The suspects, according to the prosecution system, would have deducted from taxation up to 80% of the income of their financial years, providing accurate instructions to the employees so that they could record the actual income in parallel accounting. In 3 years, over 2 million euros in profits would have been hidden from the tax authorities and tax evasion of almost 800,000 euros.

The detainees could have large sums of money, which were recycled into new purchases of economic activities, without neglecting the purchase of sports cars, trips to exotic countries and luxury goods.

The high standard of living also emerged from stories on social media, where photos were published portraying them in prestigious tourist destinations and driving exclusive custom-purchased cars.

In the numerous searches carried out during the investigation, the financiers seized piles of money, even in 200 and 500 euro denominations, hidden between clothes, in jars and in cardboard boxes.

As a result of the detailed investigations carried out against all the investigated entities, originating from Eastern Europe, the investigators reconstructed, on the one hand, the tax and money laundering crimes and on the other hand, they stressed that, since their placement in Italy, the declared income was minimal and completely disproportionate to the accumulated assets.

In the face of these probative prospects, the Preliminary Investigation Judge of the Turin Court issued preventive seizure decrees both for the "equivalent", for the amounts corresponding to the evaded taxes, and for the "disproportion" of the goods purchased more than those of the declared.