Nano signs the important agreement with the senior officials of the German Federal Police, here is what it is about 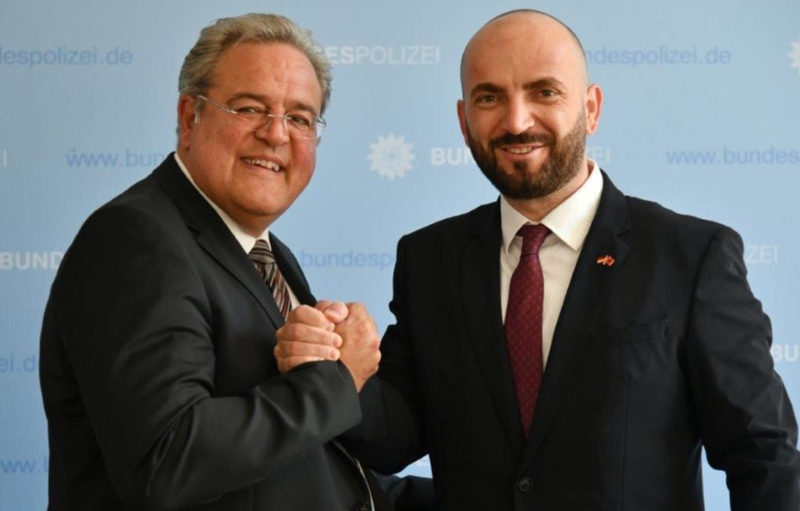 The Director of the State Police, Gledis Nano, continues the meetings with the highest officials of the Federal Police of Germany, which aim to increase the cooperation for the exchange of information, investigations and joint operations in the fight against organized crime, corruption, smuggling of immigrants. from third countries and terrorism.

The President of the German Federal Police, Dr. Dieter Romann praised the work and results achieved by the Albanian Police in the fight against crime and stressed that this is a national and international war.

The German Police praised the professionalism of the Albanian Police and stressed that in this context, it is necessary that following the cooperation between the two police, to have even more joint investigation teams, real-time information exchanges and joint operations against criminal groups operating in the field of organized crime, serious crime and trafficking in human beings.

The General Director of the Albanian Police Gledis Nano has provided the President of the German Federal Police Dr. Dieter Romann that the Albanian Police has all the professional and human capacities to be on the side and equal with the partner police, in fulfilling the joint missions that aim at the fight against organized crime and terrorism.

"Your support and that of the German Police is one more motive for me, to meet the priorities, most of which are common, as they have the same goal, creating a safe environment for the life and property of our citizens," he said. expresses Nano.

At the end of the meeting, Nano and Romann sign a cooperation agreement within the international project "SCOPE", which focuses on the fight against organized criminal groups that provide irregular immigrants with invalid documents and present them with ways to cross the border. , avoiding border checkpoints, as well as the fight against organized criminal groups, which through this illegal activity, endanger the lives of these entities.

These objectives are intended to be met through joint police operations, as well as cooperation between the responsible structures in these two countries.

They did not respect the restricted area, 3 vessels are blocked, the owners receive a hefty fine