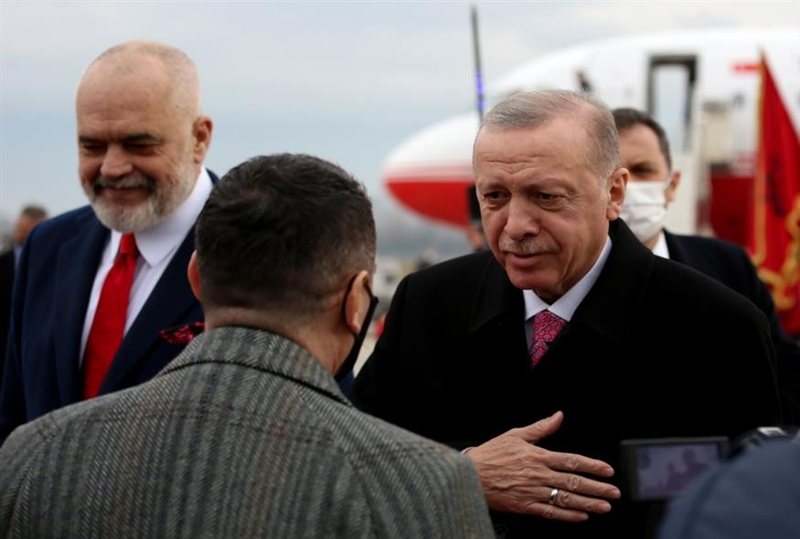 The visit of the President of Turkey Recep Tayyip Erdogan to Albania has been covered in the Greek media. "Ethnos" has followed the visit of the head of state of Turkey in our country, who initially inaugurated 524 new apartments for families affected by the earthquake of November 26, 2019 in Lac. In its article, the well-known Greek media attaches importance to Erdogan's statements about the Albanian-Turkish friendship and the great help that Turkey gives as a "big brother" for our country.

"Ethnos" writes that the statement of Prime Minister Edi Rama in the "Financial Times" a day before the visit of the Turkish president to our country that "Russia, China and Turkey are increasing their influence in the Balkans" has been met with criticism from the Turkish opposition.

The strong relations of Turkey-Albania friendship were significantly emphasized today by Recep Tayyip Erdogan during the handing over of the keys to the residents affected by the earthquake of November 26, 2019 in Lac.

"The fact that Turkey was the first country to help after the earthquake is the best proof of the strong solidarity between us," he said, wishing that "the friendship between Turkey and Albania, established on this unique basis, will continue forever." Turkish Recep Tayyip Erdogan said: “We share the same history and common cultural values ??with Albania. "Being your brother in the good and bad days is one of the most important values ??of our culture." At a time when these big countries turned a blind eye to dramas outside their borders during the coronavirus pandemic, we come to the rescue of all our friends, who are facing major discriminatory problems.

On the other hand, the Albanian Prime Minister Edi Rama thanked the Turkish President, saying that “President Erdogan is a man who does what he says and says what he does.

However, the opposition press in Turkey considers the statement of the Albanian Prime Minister in the "Financial Times" shortly before Erdogan's visit to Albania, as something controversial.

"Russia, China and Turkey are trying to increase their influence in the region," Rama said, adding that these "companions", without mentioning names, were "inappropriate".

They collided with G Class together with their baby in the middle of Tirana, good news comes for the health of the Konomi couple