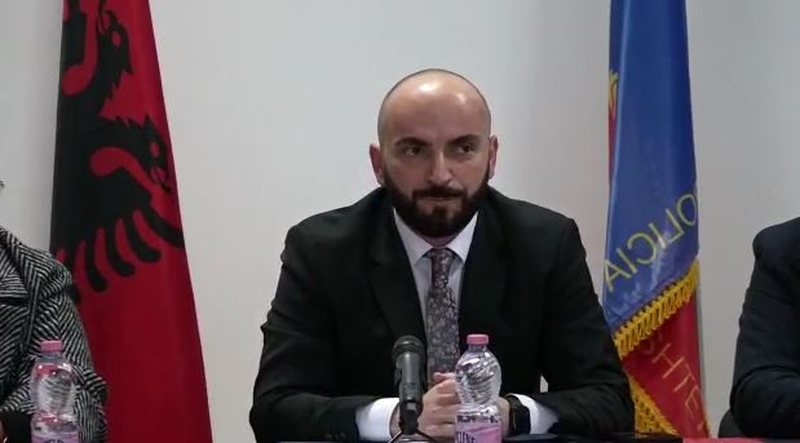 The General Director of the State Police, Gledis Nano participated in the annual analysis of the work of the structures of the Local Police Directorate in Elbasan.

During his speech, Nano thanked the leaders of the Elbasan Police and the subordinate staff, for the results achieved during 2021, and focused on the perception that has been created in the community, due to criminal events that have occurred before. In relation to this perception, the General Director Nano has assured the citizens that the structures of the Local Police Directorate of Elbasan are fully committed to continue the work, in order to prevent criminal events, create a safer environment, and to whitewash of events that occurred before, the capture of perpetrators and wanted persons.

In this context, Chief of Police Nano has asked for even more commitment from the police structures, and has asked the citizens for trust and support to help the police services, in order to prevent criminal events and change this perception that has been created over time. previously in this region.

Then, during the development of the analysis, he asked the local structures, increase the striking and reconnaissance force, uncovering the criminal events that took place before and catching the perpetrators, preventing the cultivation of cannabis, showing zero tolerance in crime prevention and striking with the severity of the law, of those who carry out criminal activities in any field, bringing consequences for the life and property of citizens.

Also, the General Director has asked the local structures to collect information, cooperating with the citizens, on the location of the wanted persons and with the help of the Operational Forces in ASP, to capture them.

Nano has assured the structures that the best crime investigation experts of the General Directorate of State Police will be available, in order to coordinate the work with the District Prosecutor's Office, to uncover criminal events that have occurred before.

He also focused on the new generation of Police, where he asked the leaders of police structures that new employees who have started working should not be left with service in the Commissariats and the Director, but the new generation to join and plan with field services , in order to increase the performance of the Police, as the new generation is welcome, creates a very positive impact and increases the trust of citizens for a more professional Police and more capable of guaranteeing public order and safety.