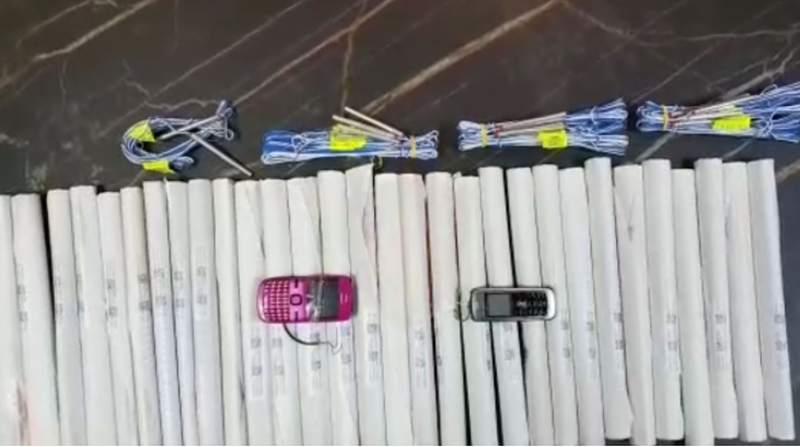 Two people have fallen into the hands of the Police today in Milot, after they were caught transporting 30 C-4 explosive molds and 17 detonating capsules towards Shkodra. It is learned that Agron Manuka and Imer Losha have been handcuffed.

Lezha Police prevent and crack down on an attempted trafficking of explosives.

The police operation codenamed "Pllana" is finalized, developed by the Lezha Police Commissariat, the Sector for Narcotics Investigation and the Operational Force in DVP Lezha.

30 molds with C-4 explosives, 17 detonator capsules, 2 mobile devices connected to electric conductors, ready to be mounted with remote-controlled mines, and a vehicle were seized.

2 citizens who exercised this criminal activity are handcuffed.

Following the work to prevent, identify and crack down on criminal activity in the field of trafficking in explosives, based on information received on the operational road that some citizens who were circulating by vehicle from Milot in the direction of Shkodra, were suspected of transporting explosives , the police operation codenamed "Pllana" was organized and finalized.

As part of this operation, in the old Milot-Lezha axis, in the village of Pllana, the Police services have identified the suspected vehicle and have made it possible to stop it.

During the control of the vehicle driven by AM citizen and passenger IL citizen, the Police found and seized as material evidence: 30 cylindrical molds with C-4 explosives, 17 detonating capsules, 2 mobile devices connected to electrical conductors, ready for be mounted on remote-controlled mines as well as a vehicle.

Under the direction of the Prosecution, work continues on the full legal documentation of this criminal activity and the identification of other persons involved in it. The materials will be forwarded to the Prosecutor's Office at the Lezha Judicial District Court, for further actions, for the criminal offenses "Production and possession of weapons, explosives and ammunition" and "Trafficking in explosives, combustible, poisonous and radioactive materials", committed in cooperation.