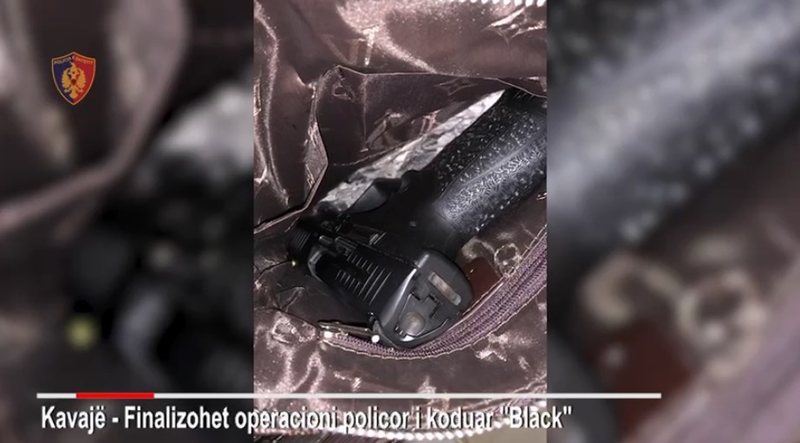 The police operation codenamed "Black" is being finalized, conducted by the Kavaja Police Commissariat, while a 19-year-old man was handcuffed. A case of illegal possession of a weapon is being investigated, the owner of a bar in Kavaja is declared wanted.

A case of organizing illegal lotteries is also hit, the 19-year-old illegally employed in this bar is arrested in flagrante delicto.

A pistol firearm and ammunition were seized.

Specialists for the Investigation of Crime in the Kavaja Police Commissariat, following the work to prevent and crack down on criminal activity in the field of illegal possession of weapons, based on information received on the operational road, that a citizen was carrying a firearm in the bar, have organized work and have finalized the police operation codenamed "Black".

As part of this operation, the citizen was arrested in flagrante delicto:

Also, the owner of the restaurant, citizen EM, 40 years old, resident in Kavaja, was declared wanted for the criminal offenses "Illegal possession and production of weapons, explosives and ammunition", "Organization of illegal lotteries" and "Employment of illegal ”.

Police services, during the search of the premises of the citizen of EM, found and seized, as material evidence, a pistol firearm with ammunition. Also, during the control of the telephone of the citizen A. Ç., Whom the citizen EM had illegally employed in his restaurant, they found programs that serve for placing illegal lotteries.

The procedural materials were forwarded to the Prosecutor's Office for further action.

Robert Aliaj cracks the unexpected statement for women: They are irresponsible! What has passed 150 people will not ...

Reprisals against the commissioners who stole the April 25 elections begin, 6 people arrested who changed the result in Elbasan

Car bomb, Director of Health Care in Shkodra was warned with a message about the explosive: It was an unknown number, I have no conflict with anyone

Kosovo imposes reciprocity on Serbia over ID cards, Vucic threatens: Our response will be deadly