"What will you say to the Albanian people who have been waiting for you for 30 years" / Macron speaks, reveals the plan to unlock the negotiations next week! What is expected in the coming days for the fate of our country? 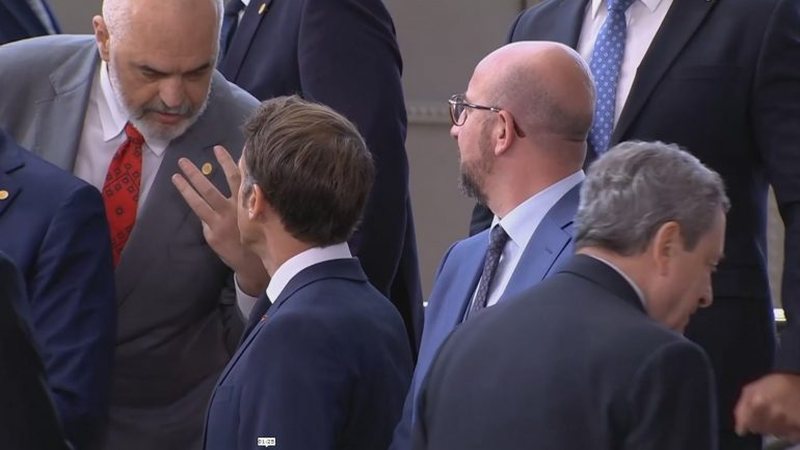 The two-day summit of the 27 member states of the European Union did not start at all smoothly, as Albania and Northern Macedonia lost hope of getting a green light on their path to integration following a veto by Bulgaria.

Meanwhile, he made a video of the network where the head of the Albanian government seemed to be debating with the President of France, Emanuel Macron, shortly before the official photo was taken.

The head of the "Elysse" palace himself spoke to 'AbcNews' after being asked why the French presidency (January-June 2022) has proved incapable of giving a solution to the membership negotiations.

"What do you say tonight to the Albanian people who have been waiting at the doors of Europe for 30 years, a door that has not yet been fully opened?", Asked Macron, who replied saying that what is happening is not right.

"First, it is true that Northern Macedonia has done a historic job with the courage of historical leaders, such as Zoran Zaev, who have taken all the necessary risks to change the country's name and change the country's Constitution. A member state further intervened belatedly and requested changes. We cannot pretend that the problem does not exist. Is it fair to Northern Macedonia? I will tell you very honestly: No. That is why we have been putting a lot of pressure on Bulgaria in recent months. It is also the fruit (reason) of a current political crisis in Bulgaria and we can not pretend that this did not happen. I want to salute the courage and political commitment of Prime Minister Petkov (Bulgarian Prime Minister) in this context. He has done everything. We are very close to an agreement. We have made a proposal, as you know, in close cooperation with both parties, that enables the consideration of Bulgarian requests and that is in line with what Northern Macedonia can accept. All this presupposes the creation of visibility and trust between the parties. There will be a vote on the French proposal within a few hours in the Bulgarian parliament and I hope all political parties will express support. The President of the Republic must commit and we have hopes for this, the coalition parties, the parties that came out of the coalition and the opposition to vote for the French proposal. They have a European duty to vote on the basis of what we have achieved. And then, in the coming hours, we will meet with the representatives of Northern Macedonia to finalize this agreement. If all this progresses in this way, then we can move forward starting next week, starting with the body of permanent ambassadors of the EU and then continuing with the procedure and we can move forward with this project with Northern Macedonia and Albania. "But you are right, they have waited a long time considering all the efforts they have made."