Ambassador Hohman lands in Durrës and has a powerful message: This stage is not easy... 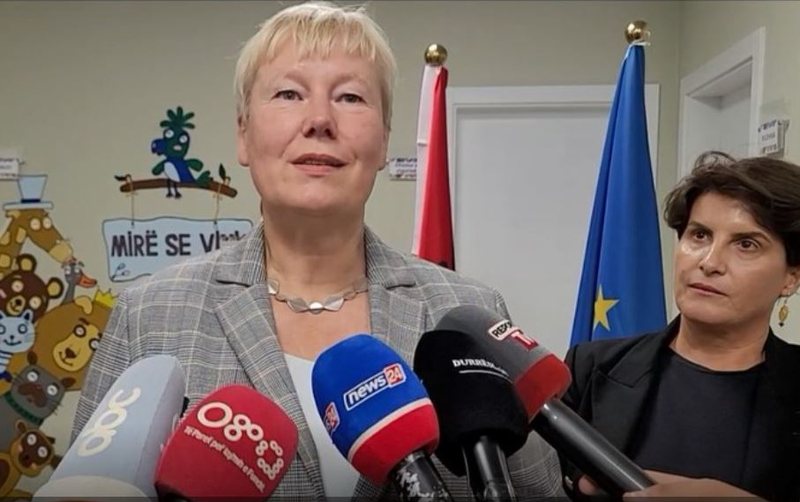 The mayor of Durrës, Emiriana Sako, and the EU ambassador to Albania, Christiane Hohmann, inaugurated nursery school No. 3, today, which was damaged by the earthquake of November 26, 2019 and was reconstructed with EU funds.

In contrast to 3 years ago, the nursery now offers very modern facilities with very high standards for about 160 children aged between 6 months and 3 years.

The road to the country's EU integration process is not an easy phase, said Hohmann, but the EU will stand by Albania until the end of this process.

It is a great pleasure to be in Durrës today. The EU is here, we are really in negotiations, but we are really here. What we see in this nursery is what is done in these programs. It is a pleasure to see how these nurseries and these gardens have been rebuilt after the earthquake of 2019. In July, Albania opened a new page of its relationship with the EU, this was the opening of the negotiations. This stage is not easy at all. It will take time and work, the EU will stand by you in this process until its completion. The municipalities will also play their important role, it is important that we move forward together' - said Hohman.

Meanwhile, the mayor of Durrës, Valbona Sako, thanked the EU for the construction of educational institutions.

'Today we received the EU ambassador on a visit. I thanked him for the great help given to the municipality of Durrës, for EU4School and EU4Culture, we now have the opportunity to requalify a large number of educational buildings. We also talked about integration in the EU, when municipalities have a very important role,' said Sako.

Asked about the progress of this process and when the new Durres schools are expected to be handed over, Ambassador Hohmann and the UNDP representative in Albania, Monica Meroni, did not state a specific deadline, but stated that they are trying to complete every procedure as soon as possible.

The EU's EU4Schools program began its implementation in April 2020, as aid to Albanian cities heavily damaged by the earthquake of November 26, 2019. Within the framework of this program, interventions will be made in 60 educational buildings, in 11 municipalities of country.

"I stayed in a coma for 2 months"/ The well-known character of the Albanian screen talks about the shocking accident: The brakes did not work. In Tirana they did not give me hope for life