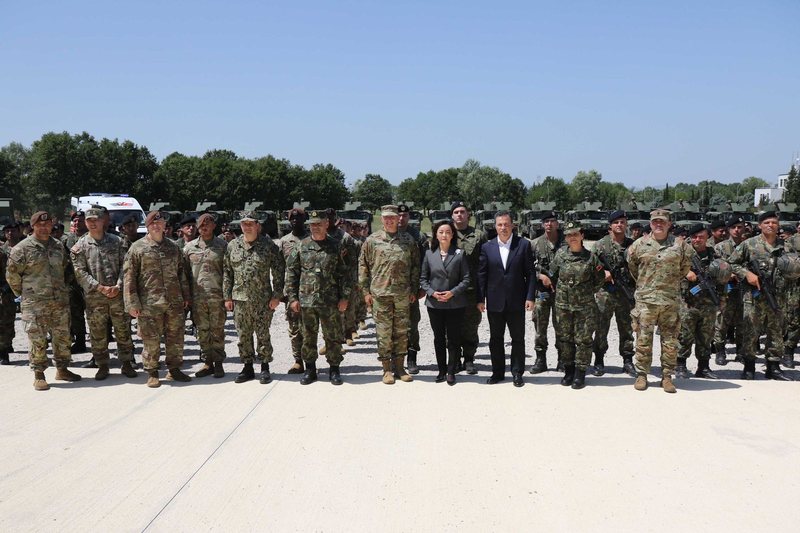 The Security Forces Assistance Brigade of the United States of America (SFAB) is activated in Albania, a team that will support and advise the Second Infantry Battalion of the Ground Force.

In the ceremony organized on this occasion, in the presence of the Minister of Defense Niko Peleshi and the US Ambassador to Albania Yuri Kim, the importance of interoperability between NATO allies in a new field for world security was emphasized.

In his speech, Peleshi praised the continuous support and assistance that the US has given to the Armed Forces.

"This group-battalion is our main objective in NATO and we are working intensively to make possible the realization of all obligations in this framework and obviously the assistance of the American team is of special importance. I am convinced that your work will bear its fruits and will be crowned with the successful certification that this structure will undergo during the month of September of this year", said the Minister of Defense.

Emphasizing the very important decisions that were taken at the NATO Summit in Madrid as well as the approval of the new Strategic Concept of the Alliance, Minister Peleshi guaranteed the strengthening of Albania's commitment alongside its military allies. "Albania will not only continue to be part of the troops in the eastern wing of the Alliance with our presence in Latvia, but will also increase its contribution in Bulgaria, within the new Group-Battalions that will be created in some of the countries member of the Alliance.

We will continue to fulfill our obligations in the Alliance with seriousness and professionalism and your duty, dear soldiers, is to make the most of this opportunity given to you to further increase operational standards in order to be interoperable with your counterparts", emphasized minister Peleshi.

In her speech, American Ambassador Yuri Kim praised the activation of the Security Forces Brigade and the assistance of the US army as an important step to take US-Albania relations to new heights.

"It is important that you fulfill all your objectives that were also discussed at the NATO Summit. The world has changed, there are new challenges that must be met. Every ally must be ready, prepared, and for this reason we are satisfied with today's strength in order to be ready, for NATO to be ready. Under the leadership of Minister Peleshi and Brigadier General Kingjit, the Albanian forces continue to improve through modernization, infrastructure development and structural changes that will play an important role, not only for Albania, but for regional and global security.

The interoperability of NATO tools is crucial', assessed Ambassador Kim.

The Deputy Chief of the General Staff of the FA, Major General Manushaqe Shehu, and the Commander of the Land Force, Arben Kingji, also took part in the ceremony.

The activation of the US Security Forces Assistance Brigade team in Albania comes after the activation in our country of the Advanced Headquarters of the American Special Forces in Europe.