Spartak Braho slightly measures Meta: What the president is doing has not happened in any country in the world

Keidi Bare shows Albania to the Spanish fans: There they are very connected with the National Team 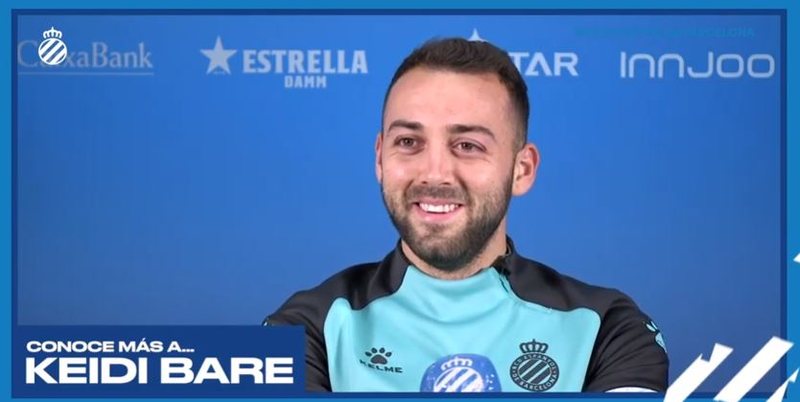 Albania will play in March two eliminatory matches for the Qatar-2022 World Cup, where the first duel in a row is against the English representative. Meanwhile, from Spain comes positive news, midfielder Keidi Bare is in shape and has now become the protagonist with his Espanyol team in the Segunda Division. Keidi Bare has become in a short time one of the most beloved names for the fans of the Spanish team, who has liked the grit of the Albanian footballer, what he gives on the field of play by never retiring in duels, and undoubtedly the skills his technical. It is no coincidence that fans have often chosen the best at certain times during the year and Bare has already become an untouchable in the Catalan team's lineup. So Espanyol itself has chosen to better introduce the footballer to its fans, asking him some questions to quench his curiosity about him, questions to which Bare has answered with a lot of sincerity but also with humor. It all starts with the nickname "Pitbull" given to the footballer. "I like to be called that. "I do not know why they gave me this nickname, for the way I am, for the way I run, I do not know how to tell the truth", the midfielder admitted, laughing. Then he was asked about Albania and here his answer was very special. "It's a very generous place and I like the food. Everyone there eats beans. They eat beans, but I am the only Albanian who does not eat them, imagine a little… ", said Bare, laughing. He then commented on the strong connection of Albanians with their representative. "Yes, it is a country very fond of football, especially when the national team plays."

The stadium will be ready for England

While midfielder Keidi Bare has time to publish jokes in the Spanish media, but also to confess the strong ties of Albanians with their national team, the AFF is preparing to properly host the English representative. It is learned that the lighting system with special lamps for the field, used in the most modern stadiums in the world, has already arrived and the first tests have started. In a statement for "Fshf.org", the administrator of the stadium "Air Albania", Kejdi Tomorri, talks about the processes that are currently taking place in the stadium to return the field to optimal condition. Tomorri is optimistic that the field will be in good condition for the March matches against England, valid for the World Cup qualifiers 2022. “The lighting system with special lamps for the field has arrived. They are the product of one of the leading Dutch companies in this field in the world, which have their systems in many stadiums in Europe, such as Italy, Germany, France, the Netherlands, etc. So it is the same system used in all the best stadiums in Europe. I think the field will be in pretty good condition, I can not say in optimal condition because the time is very short available before the March match. The field will return to a good condition, especially in the southern part of the stadium, where the shadow falls and the lamps serve precisely to increase the roots of the grass, thus to create a more stable field in that part as well ", says the stadium administrator, while explains in more detail the processes performed. On the other hand, Tomorri reminded that a hybrid carpet could be placed for the next matches. "We have initiated a series of processes related to the writing of the field, the drainage process, the aeration of the field and then there will be a planting of the field to proceed with the placement of lamps, which will further stimulate the growth of barit. "This is an immediate plan for the match with England and at the end of the match with England will come a hybrid carpet, which is widely used in indoor stadiums in Europe and beyond", Tomorri further underlined.

The big European club where the Albanian footballer plays and receives the heavy blow, is expelled from the championship