Jasmina kisses and hugs with Erlind in a date, 'explodes' Andi: You are serious… 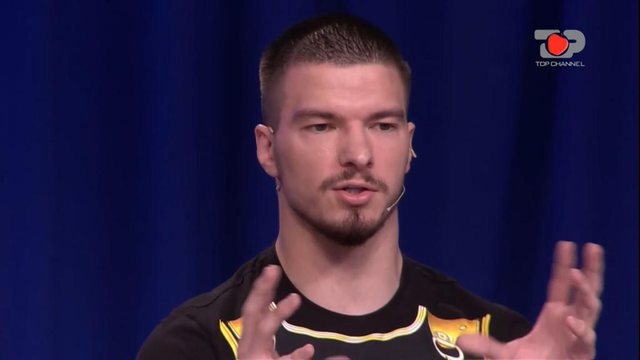 Andy reacted behind the scenes in the meeting between Jasmina and Erlind, where there were kisses and hugs.

He turned to Jasmina saying "are you serious?", While he said that he had expected Jasmina to choose him in the meeting and not Erlindi

He even said that in a way he was desperate, telling Jasmina that it is unstable.

Jasmina: They are my two likes

Andy: Are you serious?

Jasmina: What answer do you expect?

Andy: This meeting seemed to me to be watching the "Titanic". More game than conversation

Jasmina: What prevented you from having no communication?

Andy: I ??after Rinian had expectations that he would solve me in the second meeting. You did not choose me. You criticize me for treating everyone the same. But what you did to Erlind was the same thing you did to me. After the kiss we had I do not know…

Erlindi: Do you expect her to suppress her feelings?

Andy: You were the first to say when you kissed me that "hold hands and run away"

Erlindi: Yes, you yourself accepted the meeting with Sarah, who kissed Atdheun

Andy: I ??accepted it because I made no reaction. I had expectations that Jasmina would solve me and I was disappointed

Jasmina: I do not like Andy's reactions, I am 50 to 50. It is the way Andy treats other women

"Mother for the third time", the Albanian blogger shares the sweet news

Kim Kardashian comes out naked, the photo is making the rounds of the world

"Where do I have my Albanians?" / Mahnit Klaudia Pepa with the performance, takes the dance of Tropoja in Italy, the ballerina puppy dances to the rhythms of the song (VIDEO is making the rounds of the network)

Surprises Juli of Matching, tells experiences with women before entering the show: I never asked a girl to go out for coffee for this reason

Juli of "Përputhen" during a conversation "Live From Tirana" on Top Albania...

Degrades the quarrel badly / The competitors of "Për'puthen" are beaten with fists, the decision is made for one of them

In recent days, new entries have continued in "Për'puthen", the new competi...

Shocking / The young man shoots his pregnant girlfriend to death: The child is not yours! The strong testimony of the young man is revealed

A tragic event took place in the United States, where a young man took the ext...

Prince Harry confesses like never before, shows his great pledge: What I could not do in London, though ...

In a rare interview on The Late Night Show, Prince Harry has given a rare glimps...

Scandals break out in "It's My Love", Albanian journalist gets video in bed with competitor (PHOTO)

The journalist from Kosovo, Kreshnik Husaj known as Kika, after the scandal with...

Are they pretending? Saimiri is enjoying life abroad as a couple and puts the stamp on the relationship with the model, shows what Mary is to her: Love ...

After the end of the show, the two young men, Meri Murri, the model girl from ...