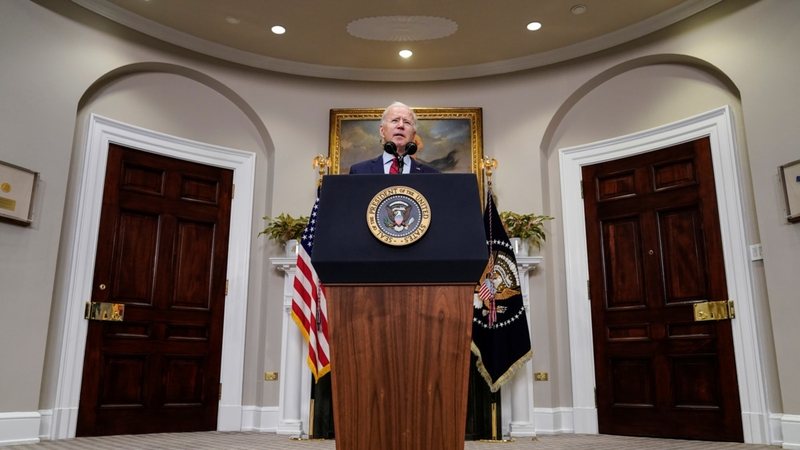 President Biden called on the Senate on Saturday to approve the $ 1.9 trillion aid package that was approved by the House of Representatives in the early hours of the day.

The package, which aims to provide financial support to businesses, government institutions as well as millions of Americans whose lives have been affected by the pandemic, will now pass the Senate after it was approved by the House of Representatives.

"The people of this country have suffered for a long time," the president said in comments from the White House before leaving for his home state of Delaware over the weekend. "We must alleviate their suffering. This is what the American Rescue Plan does. Relieves suffering. "Now is the time to act."

Votes in the House of Representatives

The House of Representatives has approved a new $ 1.9 trillion bailout package for President Joe Biden's Covid-19 pandemic aimed at helping businesses, governments and millions of Americans affected by the effects of the coronavirus pandemic.

Lawmakers voted along party lines in the Democrat-controlled House of Representatives. The package was approved by 219 votes to 212 against. Her approval has put President Biden on the path to his first major legislative victory since taking office on January 20th.

The aid package will have to be approved in the 100-member Senate equally divided between Democrats and Republicans, and Democratic Vice President Kamala Harris has the casting vote.

Democrats, who have a narrow lead in the House of Representatives, argued that the package is needed to revive the economy and fight the COVID-19 pandemic, which has claimed the lives of more than 510,000 Americans. Republicans oppose the high cost of the bill.

The package covers the costs of vaccines and other medical equipment and provides $ 1,400 in direct payments to most Americans. It also provides emergency financial relief to local and state governments, as well as business sectors affected by the economic consequences of the pandemic, such as the restaurant and airline industries.

The package will also cover the costs of unemployment benefits and tax breaks for low-income Americans and families with children, as well as provide assistance to small businesses.

Raising the federal minimum wage from $ 7.25 to $ 15 an hour was proposed by Democrats in the final version of the package, but is unlikely to pass in the Senate. The Senate parliamentary rules expert said Thursday that, as a rule, the proposal should be removed from the bill.

The decision by Senate House Rules expert Elizabeth MacDonough forced Democrats to look for other avenues for the minimum wage proposal to be passed in the face of fierce Republican opposition.

House Speaker Nancy Pelosi said Friday that Democrats will not give up on raising the federal minimum wage.

"If it does not pass because of the rules of the Senate, we will insist ... we will not stop until very soon we pass the $ 15 minimum wage," she told a news conference.

Republicans were previously opposed to the plan, considering it costly and an extravagant effort to help Democratic allies, such as workers' unions and Democrat-led states.

This is making the political struggle a confrontation, the winner of which will be seen by the reaction of the population in these crisis conditions. The pandemic has killed over half a million Americans, left millions unemployed, and transformed the daily lives of almost all Americans.

The battle is also emerging as an early test of Biden's presidency's ability to maintain his party's fragile majority in Congress - with just 10 votes in the House of Representatives and an equal 50-50 Senate.

Democrats say the still fragile economy and the coronavirus that continues to spread wildly require action. They seem determined to try again to raise the minimum wage, and this could lead to heated debates on other issues as well.