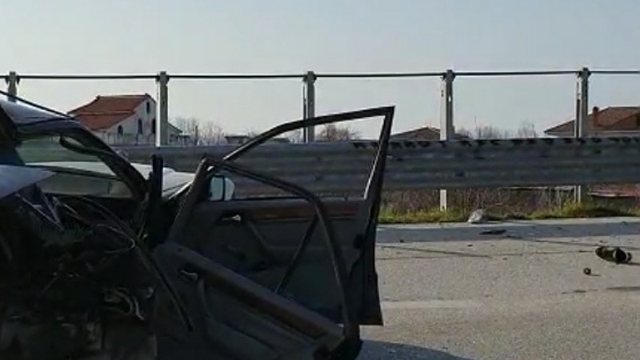 A serious accident occurred this afternoon in Vlora, where 4 people were injured and another lost his life. It is learned that the injured are aged 18 to 25 years and after transport to the hospital of Vlora, the fourth have undergone surgery and are in serious condition.

The identity of the victim is still unknown, while according to official information it is learned that he was 18 years old. The accident happened on the Vlora-Fier highway, near the overpass in the village of Bishan where two vehicles collided. It is suspected that high speed was the cause of the accident.

As a result of the accident, the citizen ET, 18 years old, died and the citizens K. D, Q, D, F. D and R. L, who are in serious health condition, were injured.

While the driver of one of the vehicles, citizen AK, was escorted to the Vlora Police Station, for further actions. The investigation team is at the scene, which is carrying out further actions in order to clarify the circumstances of the accident.

Reducing new cases, epidemiologist Alimehmeti has a tip for all those who have passed COVID now nearby

OFFICIAL DECISION! The agreement for the purchase of "Sputnik V" is approved, Albania will receive the Russian vaccine

Briken Çalja and Evangjeli Veli come with medals from Moscow, Veliaj welcomes them in his office: Municipality, additional budget for the preparation of the team for the Olympic Games